Eric Idle is an English comedian, actor, author, singer, writer, and comedic composer. Idle is best known for being a member of the British comedy group Monty Python, in which he both wrote and starred in the television series and subsequent films, as well as having composed and performed many of the Pythons’ most famous comic pieces. Idle is the creator, writer and director of THE RUTLES, an affectionate parody of The Beatles, which was made famous on SATURDAY NIGHT LIVE, as well as for writing the Tony Award-winning play, SPAMALOT. As an acclaimed writer, Idle has penned several books including “Always Look on The Bright Side of Life”,  “Hello Sailor”, “The Greedy Bastard Diary”, The Road To Mars”, The Rutland Dirty Weekend Book”, the play, PASS THE BUTLER, and the oratorio, NOT THE MESSIAH. 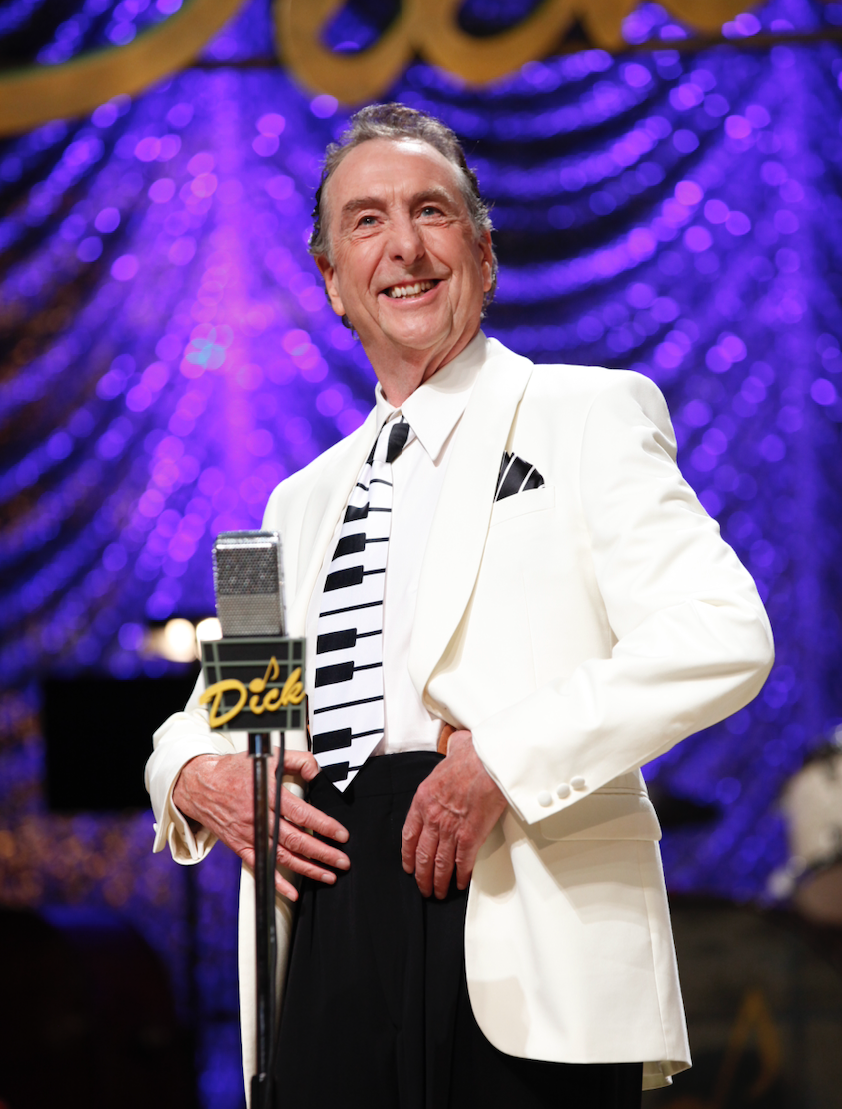 What About Dick? played to SOLD OUT crowds at the Ricardo Montalbán Theatre in LA, Nov 10th and 11th, 2007.

Only once in a lifetime you see a cast like this -- Billy Connolly, Tim Curry, Eric Idle, Eddie Izzard, Jane Leeves, Emily Mortimer, Jim Piddock, and Tracy Ullman -- well twice actually in this case since there were only two performances. But if you missed both occasions then you can tell your grandchildren you weren't there either of the days they did that thing you missed. The music was by Idle's Spamalot partner John Du Prez and the sound effects artist was Tony Palermo

The concert has been devised and directed by Eric Idle. The music and lyrics by are Neil Innes. RUTLEMANIA is produced by WestBeth Entertainment. These performances are part of the 30th anniversary celebrations of The Rutles.

Eric Idle said, “Finally -- nostalgia for things that never existed – with Mersey Boys, real girls, singing and dancing, and exotic tea drinking! I am sure this is soon to be a major lawsuit - and I suggest you hurry and buy a ticket so you can see it before it stops.”

The Rutles were first immortalized on screen by semi-legendary Monty Python alum Eric Idle, and Saturday Night Live Lorne Michaels in the 1978 Classic mockumentary “All You Need is Cash” (available on DVD from Broadway Video) and re-immortalized in the sequel, “Can’t Buy Me Lunch.” These ground-breaking films began an entire genre of mockumentary film making. 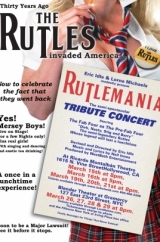 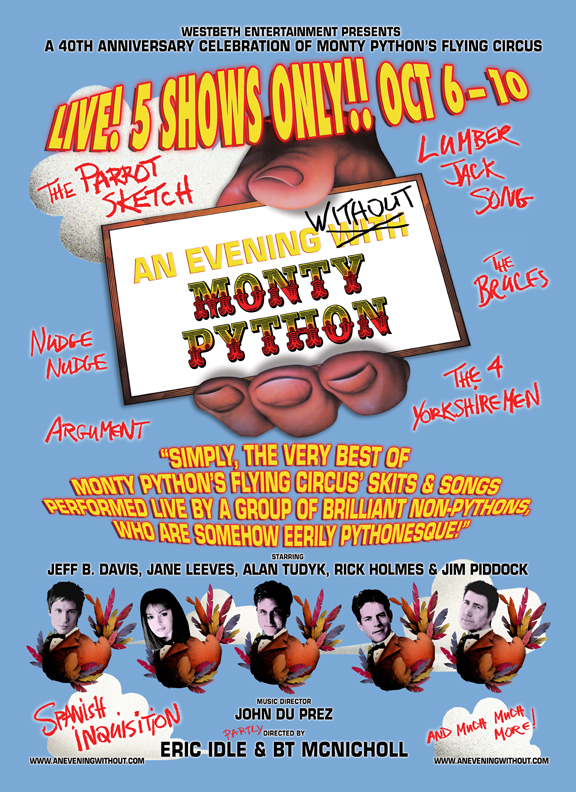 ERIC IDLE¹S WHAT ABOUT DICK!- 2012 The Orpheum Theatre in Los Angeles

​'With eight new songs from Eric Idle and John Du Prez, the Grammy-award winning duo who brought you SPAMALOT

The performance of What About Dick? was videotaped and is available on Netflix.

Idle calls it a nice hybrid... It’s got elements of a musical – we have songs – and it’s got elements of a play, but it’s not a play that you have to take completely seriously because it’s a sort of send-up. It has bits of stand-up and improv and these hilarious actors playing multiple roles and doing impersonations. I was laughing so hard there were tears running down my cheek.”

Described by Idle as “Oscar Wilde on acid, or like Downton Abbey, only even funnier,” Dick? begins with the birth of a sex toy invented in Shagistan in 1898, tells the story of the decline of the British Empire as seen through the eyes of a Piano, as well as the story of young Dick, his two cousins and their dipsomaniac Aunt Maggie, who all live together in Kensington in a large, rambling, Edwardian novel. There’s Reverend Whoopsie, a private Dick, the incomprehensible Scottish Inspector McGuffin and the case of the Houndsditch Mutilator. What else do you need to know for six bucks? 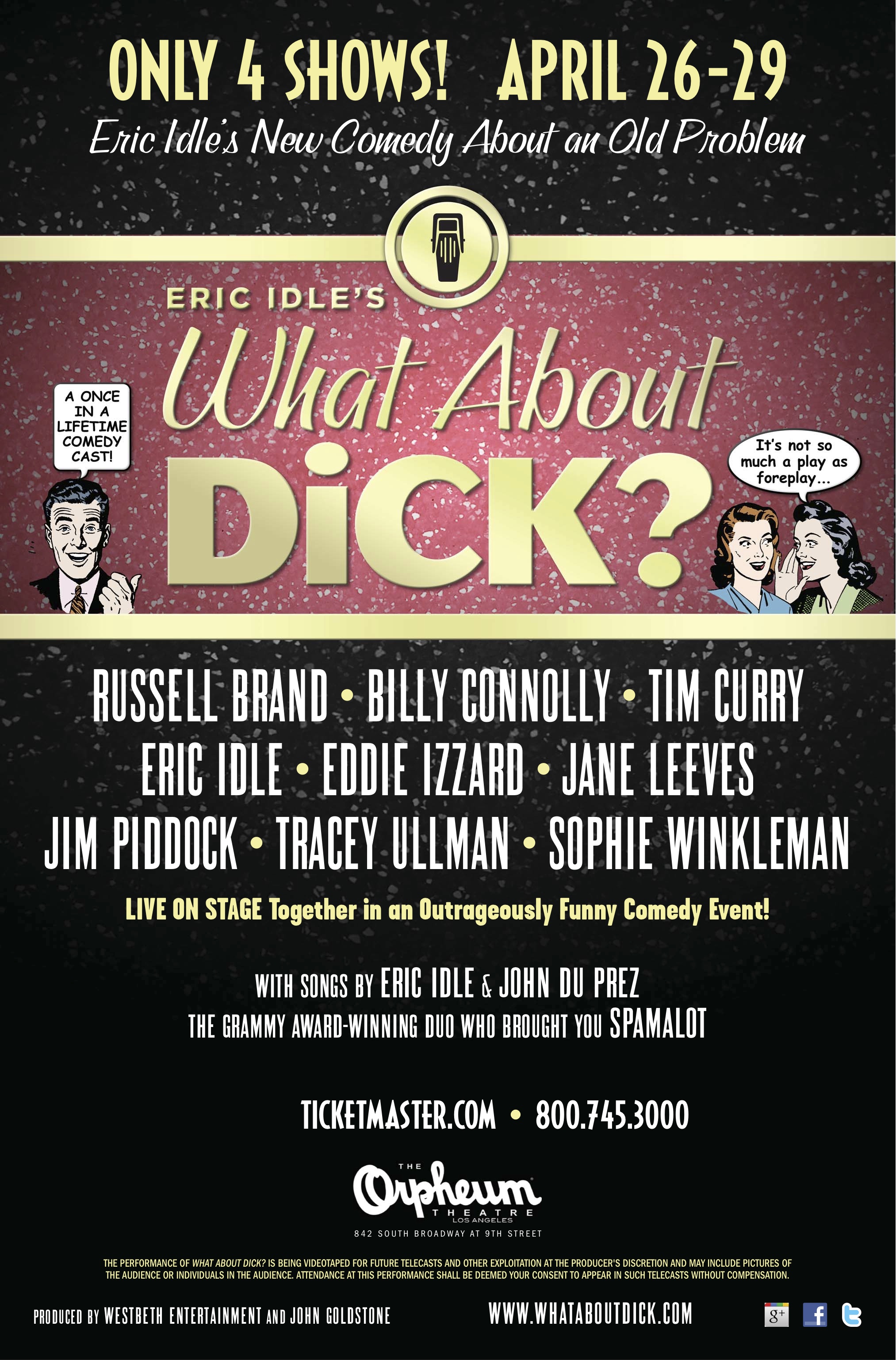