Aunty Donna’s loud and energetic live shows have taken them around the world multiple times. They sold out their Australian and New Zealand Comedy Festivals seasons from 2016 to 2018 before hitting Edinburgh, London, Montreal  & Hong Kong. They have toured North America three times performing to sold out crowds in Los Angeles, New York, San Francisco & Austin.

Aunty Donna  developed award winning ‘1999’, an original web series exclusively for YouTube thanks to Screen Australia and Google’s Skip Ahead funding before moving onto television with ‘Trendy’ the first piece of local content commissioned by Comedy Central Australia. You have also seen them on your screens with their live show being part of ABC’s Next Gen series as well appearance on Get Krackin’ and Mad As Hell.

2018 saw Aunty Donna branch out into the music industry and release an album, the self titled album debuted at number 30 on the Australian charts and received an ARIA nomination for Best Comedy Release

In 2019 they released their biggest webseries to date, Glennridge Secondary College. A 16 part series which has garnered over 500K+ views on YouTube and went on to be nominated for an AACTA Award in the Best Online Drama or Comedy category.

In 2020, Aunty Donna made their Netflix debut with the Netflix Original Series 'Aunty Donna's Big Ol' House of Fun' 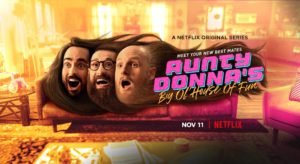 Donna invites you into their Big Ol’ House of Fun! In their new Netflix original six-part sketch series, Aunty Donna’s  Big Ol’ House of Fun, Mark Samual Bonanno, Broden Kelly, and Zachary Ruane take viewers along for an absurdist adventure through their everyday lives. Come on inside if you’re prepared to handle satire, parody, clever… 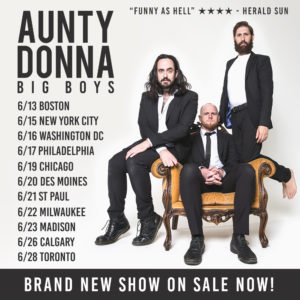 After debuting in North America to sold-out audiences in New York, Vancouver, San Francisco and more last June, the award-winning  Australian comedy group return with a brand new show, BIG BOYS!  And in the meantime, be sure to check out their debut album (released April 6th) that’s currently topping charts in Australia. Available at auntydonna.com and… 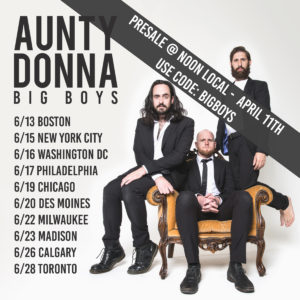 BUY TICKETS at www.AuntyDonna.com/shows before they sell out! Aunty Donna are an award winning Australian comedy group producing and performing live shows and videos, with a YouTube channel reaching over 181,000 subscribers with over 30 million views.  Creating everything themselves, Aunty Donna are actor/writers Mark Samual Bonanno, Broden Kelly and Zachary Ruane; writer/director Sam Lingham;…