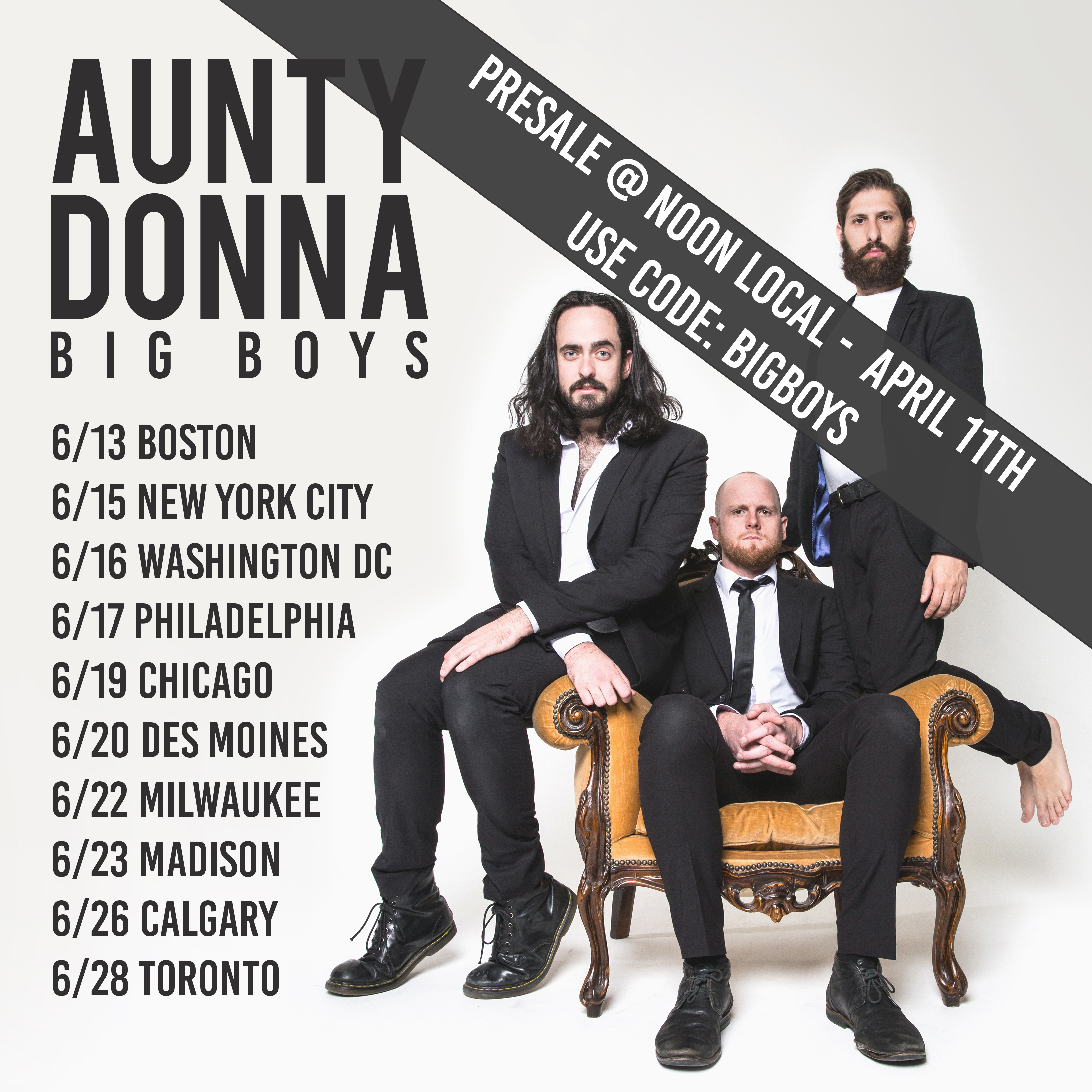 BUY TICKETS at www.AuntyDonna.com/shows before they sell out!

On April 6, 2018, Aunty Donna released their first album, Aunty Donna: The Album, and they have released music videos for several of the songs on the album including “Professor Whiskers,” “War Isn’t Cool,” and “Best Day of My Life.”  The album is available on iTunes, Amazon and other major retailers.  All of the music videos are available on Aunty Donna’s YouTube page.

In June 2018, Aunty Donna will tour theaters across the eastern half of North America featuring their new show, Aunty Donna: Big Boys.  The Donnas brought Big Boys to the western half of North America in February and toured Big Boys to critical acclaim through Australia and New Zealand with a two week run at The Edinburgh Festival and a four night sold-out run at The Leicester Square Theatre in London.  The show earned the group a 2017 Helpmann Award nomination for Best Comedy Performer (the Australian equivalent to the Tony Awards).

In June & July 2017, Aunty Donna made their first North American tour of theatres featuring their hit show, Aunty Donna – New Show.  The North American tour concluded with a critically acclaimed three-night run at The Just For Laughs Festival in Montreal, before running for two weeks at the Edinburgh Festival in Scotland and running for four sold-out nights at The Leicester Square Theatre in London.

With a unique brand of surreal, fast paced, alternative sketch, Aunty Donna exploded onto the Melbourne comedy scene in 2012 with Aunty Donna in Pantsuits.  Their debut show was nominated for the illustrious Melbourne International Comedy Festival’s Golden Gibbo Award and they won the 2012 People's Choice Award at the Melbourne Fringe Festival.

In addition to the live shows, Aunty Donna’s online presence is massive.  Video projects include the award winning original web series, 1999, exclusively for YouTube thanks to Screen Australia and Google’s Skip Ahead funding; Trendy, commissioned by Comedy Central; and a pilot for ABC iView and Screen Australia as part of the Fresh Blood Comedy Initiative.